Army Bracelet returned to soldier after being lost for over 60 years.

Most treasure hunters jump at a chance to metal detect vacant city lots, especially when it’s on city property, and especially when the city has cleaned the top soil off the corner lot behind the newly remolded city court chambers building, to put in a paved parking lot.

The old house that sat on the corner lot had burned, and the lot was cleaned off, and had sat vacant for several years.

I drove by one Sunday in May, while the dirt was being removed, the grader was still on the lot. I stopped and got my metal detector out of the back seat and started hunting. In a few minutes I received a signal for a dime, and dug up a 1917 mercury dime, a few steps further I dug up a 1919 mercury, I was having fun. I also found other old coins, toys, old bottles, but my best find was when I got a signal for a quarter, but it wasn’t a quarter, it was a bracelet with a U.S. Army insignia on the front. On the back it had a name and date, 12-29-1930. I knew if it was possible I would try to find the person it belonged to and return it. The name wasn’t in the local phone book so I went to the internet, and sure enough I had found the old soldier with a birth date of 1229-1930, along with a phone number. He was still

alive and lived in a small town in Oklahoma. The first attempt to call was no answer, so I tried again on a Sunday afternoon, and his wife answered. I explained who I was and that I had found a bracelet that belonged to her husband. She told me that he did live in Blanchard, OK., back in the 50’s after returning from a tour in the Korean war, and before he spent two tours in Viet Nam.

She told me that he also was stationed over-seas in Germany , France and also stateside before retiring in 1974 as Chief Warrant officer 02, with nearly 23 years of service.

Now at 84, in failing health, Mr. Lushbough sat up in his easy chair as I presented to him his lost bracelet along with an Army button from a uniform that I had found near by the location of the bracelet, and my own thanks for his service to our country. 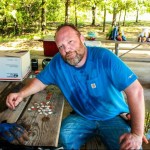 I have been a sheet metal worker for the last 20 years, I have recently received a degree in mechanical engineering. I love to fish and kayak. I am the president of Central Oklahoma Metal Detecting Club. I am also the administrator to our clubs Facebook page and Metal detecting Oklahoma treasures (A Facebook Group). I Metal Detect and do research as much as I can fit into my schedule.